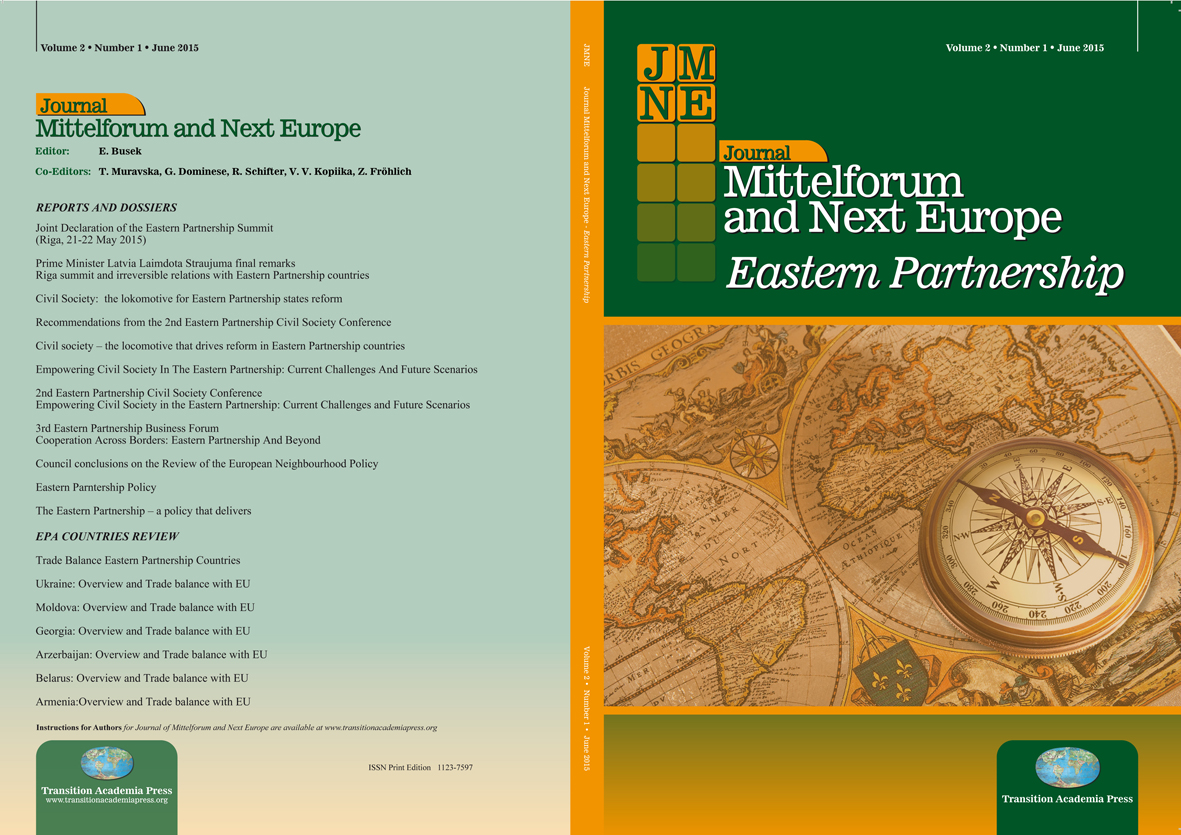 Paradoxically, too superficial analysts of the perspective of the relations with Russia and the long lasting transition beyond the EU enlargement and even the German reunification have found really few voices in Europe and in the world to resist to this “irenistic” attitude in the dialogue with Russia.

The Journal Mittelforum is representing these evolutions and contradictions in quite a timely situation. In 2002 CEEUN-Central Eastern European University Cooperation was founded with the aim to connect a group of experts and university faculty in a program of cooperation devoted to research programs and specialized international postgraduate and doctoral courses. The Network grew fast and soon after the scientific “voice” was established with the Journal Transition Studies Review, published initially by the CEEUN-Centre for European Eastern Network, then by Egea - Bocconi University Press, and finally by Springer Wien-New York. But now we took the initiative with some universities in order to publish the journal with our Transition Academia Press. Still in 2014 we will publish three journal titles in a print version and online as well. The online version will be hosted by InfoFactory, the platform of the University of Udine, in Italy. By 2015 we will most probably publish five journals.

CEEUN was launched in Vienna and its first meeting took place in 2002 at the Institution that was founded by Friedrich August von Hayek and Ludwig von Mises, two great thinkers and economists: the Austrian Institute for Economic Research. Some of us more closely connected to the story of Mittelforum might think that we have decided quickly: “Mittelforum and Next Europe". We will have a new life and become a challenging journal as a haven for scientists and experts who would like to publish with us, because transition is just at the beginning and it will take many decades to reshape and reform the world of today according to the promises we profusely made in the last twenty years. Now it is time to face the many issues accumulated by the lack of strategies and actions in the Eastern “Blue Belt” from Antarctic, Baltic, Balkan, Black and Caspian Seas, Near East, as well as stand up and enforce a strategy where the military options could really impeed a scenario of a terrific third world war “mayday”.

The main requirement is that a decisive scientific effort should be made in order to create the human capital and the intellectual capability to cope with the unpredictable and the emergencies with a new generation of weapons. The two intellectual gravity centres for these efforts are the Great Central and Eastern Europe - wider and conceptually brand new but looking back to the Mitteleuropa of one century ago - at the “day before” the First World War and its millions of European and also a significant number of American victims.

At the same time, the indifference for the events occurring in the “Green Belt” from North Africa to Indonesia, including the powder keg of the Great Middle East and the whole of the Arab and Islamic world - which should have been the focus of the Mediterranean policy - have reached the horrific and guilty "closing the eyes" in front of the barbaric abandoning of Syria to the civil war and now to the fundamentalism spreading out, as well as the indifference to the growing Israeli-Palestinians tensions and conflicts, with the fatal contagion, consequences and never ending conflicts, fundamentalism and sectarian radicalism in the Great Middle East, in Europe but also in the whole world. No time for evanescent seduction of the past but only for well-founded options for the future of the whole great continent from Europe to Asia.

The role of Russia will be decided by these factors of resistance, as the backwardness and the marginality of the Country in the global economy bring it to rank among the lowest indexing main countries worldwide. Europe and Russia have to find a new dialogue format to avoid again the Europeans fighting against the Europeans.